The story of Gear Knobs

Home for classic cars of all ages and types

What sort of classic car lover are you? Our path started pretty much offroad – meet our Willys – before we took to the highway. Epitomes of engineering superiority, timeless elegance and impeccable taste like Porsche 356, Austin Healy, the unforgettable 911 Turbo (type 930) and many more have found a home together at Go Classic. We do not live with cars – we live cars.

More than 100 years have passed since the gearbox found its place between the front seats. Its length, placement and form have changed a thousand times – with one exception – its knob has always remained within easy reach of the driver. In our opinion, the second most important device after the steering wheel deserves just as much attention as the first – that is why we have created it anew. Meet our classic wooden gearbox knob collection!

Go Classic gearbox knobs combine a classic timeless design and the latest wood working technologies. The elegant color combinations and universal form make them suitable for both classic as well as contemporary automobiles. Four different kinds of wood are used in the manufacture of the gearbox knobs. Select from the modern, elegant or classic knob series – choose your favorite grip!

A misty morning. The willing murmur of the engine. First gear in. Go.

An early morning drive along a deserted mountain road in a classic automobile is a real sensory treat. The incredibly clear pervading morning light, plenty of oxygen for the engine and curves and bends. Numerous curves and bends. One village follows the next, fragrant marsh marigolds, the imminence of a nearing waterfall, the joy of driving and the feeling of being one with your automobile as the speed and revs of the engine mark each approaching curve. The fresh breeze blowing in through the window and the warmth of masterfully crafted wood in your hand. Go Classic gearbox knobs. Memorable driving moments.

The right gear at the right moment – and with style. Wooden gearbox knobs for all-time classics. Inspired by nature, designed from the heart.

A misty morning. The willing murmur of the engine. First gear in. Go.

The story of the Go-Classic Coffee

Just like his Swiss watch, the telephone also showed precisely 7.23 in the morning. The sun had just risen above the horizon signalling that this would be a typical late August day – cool and dewey all morning until about noon; by then the sun will have warmed up so extensively that it will be hard to believe that August is the last month of summer.

The 1979 German edition of Remarque’s “Three Friends”, the one with photographs of automobiles on the cover, lay open on the kitchen table to the chapter in which the main hero begins his trip to the sanatorium in the Swiss Alps to visit his love. Next to the book, freshly brewed “Go-Classic” coffee was aromatically steaming in an elegantly ascetic espresso cup.

Seated at the table he took the espresso cup in one hand and the book in the other to continue to experience the adventures of Remarque’s novel, for yet another time. He had read “Three Friends” three times already. He did not have much of a chance to delve into the world created by Remarque, because as he was reading about the hero’s trip to picturesque Switzerland, he was overtaken by delightful and powerful memories of the time he had experienced his own unforgettable trip through the Swiss mountain passes in his own “Porsche 356”. To enjoy the breathtaking views, to feel the power of his automobile and, after all, to get to know himself better as he maneuvered along the very narrow mountain serpentine roads.

Since time immemorial people have believed that there is something divine about the mountains – before man discovered flight, mountains were the only way to physically get closer to the heavens – the home of the gods. These thoughts prompted he, observing the color play in his espresso cup, to ponder the fact that coffee often is referred to as the drink of gods. There is an ancient legend about Ethiopian monks who were so angered by the bitterness of coffee beans they threw the beans into the fire; in a few moments they sensed a beautiful, almost divine aroma; the beverage they concocted from the roasted beans kept them awake all night and they considered it a gift from the gods.

He has always delighted in this legend; several thousands of years have passed, but coffee still helps people remain awake – in the morning when they need to rid their bodies of the last traces of sleep and get a kick start to their day, in the afternoon as fatigue sets in while traveling on the road, in the evening when a job has to be finished to meet a deadline but sleep has begun to obstinately overtake the body and mind.

Finishing his last sip of espresso, he understood yet again that coffee, first and foremost, is a treat that can offer unforgettable experiences. He remembered the time at the Klausen Pass hotel he enjoyed a cup of coffee looking out over the Alps. At that moment, looking at his Porsche shimmering in the sunlight and feeling the worldly freedom at his feet, he was overcome with the idea of creating something of his own to reflect these feelings. It is nearly impossible for people to create mountains and the best places in the automotive industry have already been taken. He thought of coffee – why not? Especially since it is possible to combine his great passions – driving in the mountains, retro automobiles and the feeling of freedom – and express those feelings in coffee. And he did exactly that – he created his own coffee, three unique flavors named for famous Swiss mountain passes, an album of memories of unforgettable journeys. The packaging design reflects his great love for the classic automobile.

An sms signal in his telephone rouses he from his wanderings back in time. The clock shows 7.45 and the message “Let’s live?” flashes on the screen. He knows that he will not be let down by his personally created espresso he had just enjoyed nor by his reliable automobile. Remarque, on the other hand, will have to wait for the evening, when at the end of the day with coffee cup in hand, he will be able to continue to re-read one of the most beautiful works of classic literature. 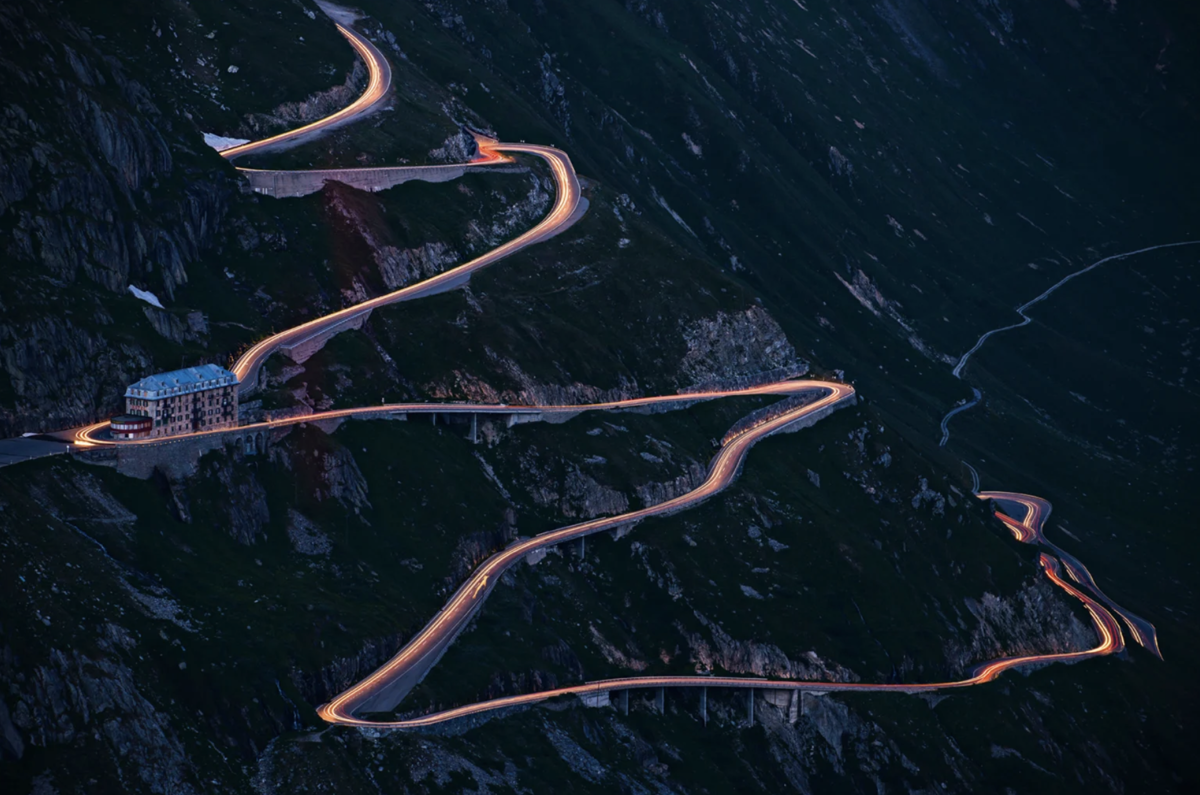