I didn’t know much about classic cars but one day that quickly changed. While looking through the endless postage stamp catalogs online, a particularly fascinating car caught my eye. 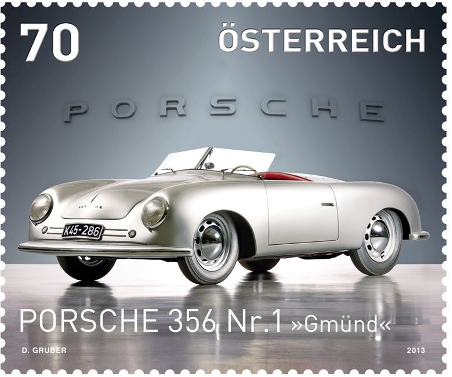 Austrian stamp number AT 2424, issued on February 28, 2013. Its original value was only 70 euro cents, and there were 415 000 units made. So the value of the stamp won’t be significant in the near future. But the car displayed on it turns out to be immensely valuable.

If you click here you can have a look at the stamp and even buy one for yourself!

After some intricate research on the internet, I can knowingly say that this is the first-ever Porsche made sports car! While Ferdinand Porsche was working for Volkswagen and designed the famous VW Beetle, his son “Ferry” Porsche was complaining that no car was good enough for him. So he started making his own. [6]

The Porsche company opened in the Austrian city Gmünd where he started his project number 356. A hand made aluminum body was placed over the tubular steel frame. Most of the parts came from the VW Beetle including the 1,1-liter engine, which was put behind the seats, and spiced up to 35 horsepowers. Although it sounds quite sluggish, the 585 kg car reached up to 135 km/h and was nimble around corners. [1]

The 356 #1 was presented in July 1948. It quickly gained a reputation as a fast and agile sportscar yet trustworthy for regular traffic as well. Soon after, many new cars and models followed this iconic one. 76,302 Porsche 356 cars were built up until April 1965, but as we all know there can be only one first car and this is it!

After more than 70 years the original Porsche 356 Nr.1 was bought back from a collector for an undisclosed sum of money. It was taken on tour visiting countries all around the world and now rests in the Porsche Museum in Stuttgart, Germany. [2]

Intrigued by the Porsche’s history, I kept looking for more information. I found out that there is at least one stamp for every Porsche 356 model. Next in product lines was the Porsche 356 A.

Porsche 356 A sets a successful path in Porsche racing history 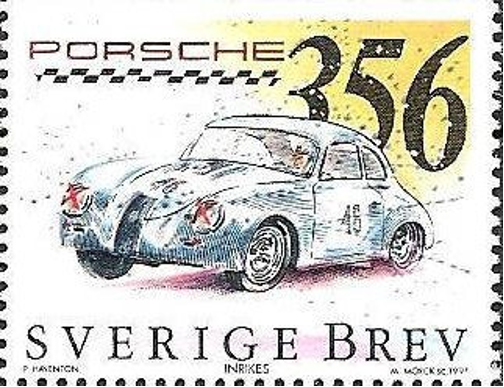 The racing background of this model is even portrayed on a historical stamp! Stamp number SE 2250, issued in Sweden, in 1997. You can have a look at it and buy it here.

The Porsche 356 original model gained unexpected popularity. The high demand forced the Porsche company to relocate back to Stuttgart, Germany. The new model 356 A was built between 1955 and 1959. There were a couple of interior and exterior modifications. Most noticeable was the single-piece, curved panoramic windscreen. Of course, they also improved its performance. There were many variations starting with a 1,3 liter, 44 horsepower engine, going up to a 1,5 liter, 100 HP engine for competitive racing. The most powerful was called the Fuhrmann engine, named after designer Ernst Fuhrmann. [3]

The model fitted with the biggest engine was named Porsche Carrera, after the famous race Carrera Panamericana. But soon after came the new model Carrera 1600 GT with 115 HP. It was nicknamed the “Icebox”; because of weight reduction even the heater was taken out. This model won the Liège-Rome-Liège rally race, and in 1957 the same car finished in fifth place at the Tour de France Automobile. A pair of Carrera GTs with bigger 1529 cc engines won their class at the 1957 12 Hours of Reims endurance race. [4]

Porsche 356 B - a memorial for German classic auto history 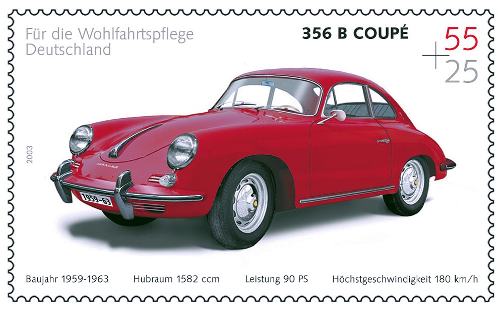 This is a special welfare stamp called "Postage with a heart": Made in Germany, 2003. Its value is only 55 euro cents, but they printed 4,300,000 copies. This stamp acknowledges that Porsche supports welfare organizations in Germany. You can have a look at it here, but more about that later. First some interesting facts about the Porsche 356 B.

This model was built between 1959 and 1963. The arches on the front bumper were more distinct and higher up and the front lights were located here as well. I guess this was the beginning of the unique Porsche 911 design, which attracts so many car enthusiasts, myself included. This body style is known as T5. A total of 30,983 units were built until the next model came along. [5]

Four versions were built for racing: the 356 1600 GS Carrera GT, 356 Carrera GTL-Abarth, 356 2000 GS Carrera 2,and the 2000 GS-GT. The first three have 4-cylinder naturally aspirated “boxer” type engines. All of them had a successful racing history. The Abarth even won the Le Mans 24-hour race in 1960, but when the 2000 GS-GT arrived at Le Mans in 1962 spectators were surprised by the weird bodywork of the car. It was nicknamed the "triangular scraper", because of the specially developed bodywork for high-speed courses. (6)

Now back to the stamps. In 2003 the Porsche 356 B was featured for several weeks as the main image on around 12,000 billboards, over 100 screens in underground stations, and on posters in more than 30,000 social welfare establishments across Germany. Around 20 cents from each welfare stamp sold benefited the social welfare work of the workers. The organizers of Germany’s voluntary welfare community were hoping that the catchy Porsche motif would create great awareness and the special place that this sports car classic has in people’s hearts would lead to a higher sales success. [7] 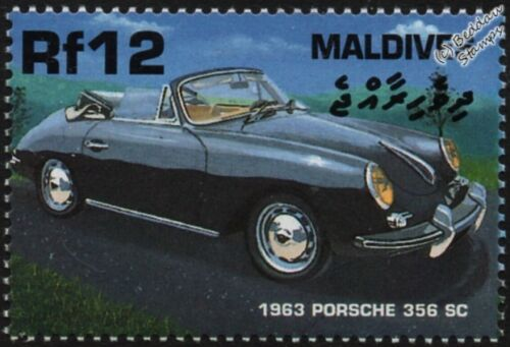 For a limited time, this stamp of the Porsche 356 SC is available on e-bay. It was Issued by the Maldives in 2000 as part of the "World of Porsche" stamp series.

As far as appearance, the last T6 body style was very similar to the previous T5. Most noticeable were the new modified rims. Disk brakes were hiding underneath the flat hubs. But under the bonnet more powerful engines were hiding starting at 75 HP and up to 130 HP. [8]

The new Porsche 911 gained all the fame and the 356 series was outdated. But I believe they will never be forgotten.

This is why I love my stamps. It started as an eye-catching car on a small piece of paper, and now I am well educated in the history of Porsches - especially the fascinating and meaningful 356 series. I am so thankful for that!

By the way, I found a website with a few more interesting Porsche stamps. Have a look at them.

Here You could see some funny stories...